Foods You Should Never Eat Raw 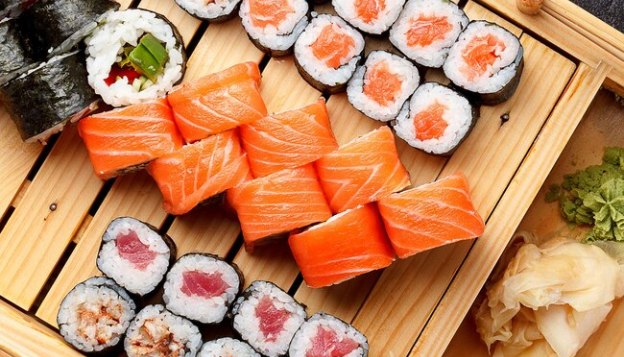 Many raw foods are safe, but some can carry bacteria or parasites. See which uncooked foods may make you sick.

Made with lean fish, vegetables, and avocado, sushi can be a good way to get vitamins and omega-3 fatty acids. But sushi can have bacteria and parasites like anisakiasis, which can cause vomiting, diarrhea, and stomach pain.

Small children, women who are pregnant or breastfeeding, and people with immune issues should skip raw or undercooked fish. Everyone should also avoid fish that could be high in mercury, like swordfish, bigeye tuna, and shark.

Raw or undercooked pork can have bacteria like salmonella, E. coli, and listeria. You can get sick from eating pork that hasn't been cooked enough or from cutting boards, countertops, or utensils that touched raw pork. Pork has to be cooked to at least 145 degrees F, then allowed to rest for at least 3 minutes before you serve it.

They can carry viruses and bacteria from the water where they live. If they aren't well-cooked, they can infect the people who eat them. Oysters can spread an infection called vibriosis, which can make you very sick. They can also spread hepatitis A, a virus that causes liver disease. Fully cook oysters before you eat them.

Ceviche is raw seafood marinated in lime or lemon juice. Like sushi, there's a chance it can have bacteria and parasites that can cause food poisoning. Skip undercooked or raw fish, especially if you are in a high-risk group, like if you're pregnant, nursing, or have immune problems.  Cook seafood to 145 degrees F. Leftover seafood needs to get to 165 degrees F.

It's OK if you don't like your meat well done, but it's not safe to go to the other extreme. Steak or chicken tartare is meat eaten uncooked. Raw meat and poultry are most likely to cause food poisoning. They can have all sorts of bacteria from E. coli to salmonella, which can make you very sick. To stay safe, be sure meats are properly cooked.

Fresh eggs can carry salmonella, which can cause food poisoning. The best way to avoid getting sick is to make sure you cook eggs until the white and the yolk are firm. Refrigerate eggs or foods that have eggs right after you cook them. For recipes that call for raw eggs, like Caesar dressing or hollandaise sauce, use only pasteurized eggs.

It can be tempting to have a taste of batter when you make cookies, but anything with uncooked flour can make you sick. The flour can have bacteria like E. coli. Don't taste raw dough or batter, and don't add flour to foods that won't be cooked. Kids shouldn’t play with flour or dough, either.

What do you do with a potato that’s turned green? The green part of the potato has solanine, a bitter substance that can make you sick. It can cause diarrhea, fever, headache, and vomiting. Cut off that green part along with the eyes and wash your potatoes before you prepare them. Once you start, cook them completely and never eat them raw.

Don't use a slow cooker. It won't get the beans hot enough to kill the toxin.

The poison cyanide is naturally in some foods and plants, including lima beans. Ones sold in the U.S. have very little cyanide. (You'd have to eat about a pound of lima beans for each pound you weigh to get really sick.) Wild lima beans can have a lot of cyanide. To be safe, soak your lima beans overnight, then simmer them for at least 2 hours before you eat them.

Like lima beans, bitter almonds also have cyanide. Eating just a handful of them can make you sick. Bitter almonds aren't supposed to be sold in the U.S. The almonds you get in stores are sweet almonds, which are safe to eat.

Some wild mushrooms have toxins like agaritine and amatoxin. These compounds can damage your liver and cause other serious health problems. Even raw mushrooms or spoiled mushrooms that don't have these toxins can cause things like vomiting, diarrhea, and stomach pain if they’re not scrubbed before you eat them.

This should only be eaten cooked. Raw taro has compounds called oxalates that can cause swelling and irritation in your lips, mouth, and throat. Cooking taro - especially with milk - helps lower the effect of these toxins.

If you chew and swallow castor beans, you can be exposed to a poison called ricin. Just a tiny bit of it can be fatal. If just the seed is swallowed and not chewed, there's a chance your body won’t take in the ricin.

Like bitter almonds and lima beans, raw cassava has traces of cyanide. If the roots are peeled and well-cooked, they are safe to eat. But if they are eaten raw or undercooked, they can lead to things like diarrhea, stomach pain, and vomiting.

The fleshy, celery-like stalks of rhubarb are often used to make pies and are safe to eat. But the plant's leaves have oxalic acid, a toxic compound. Eating them can cause burning in your mouth, trouble breathing, diarrhea, and stomach pain.

Nutrition
By Health & Medical Reviews and News at 23:11