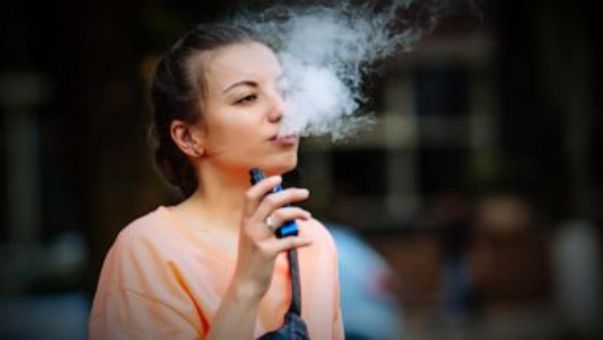 More than one in every four U.S. high school students (27.5%) currently vape, a new study shows.

About one-third of these teen vapers do so on a nearly daily basis, and nearly three-quarters favor flavored varieties of the addictive, nicotine-laden products.

And nearly 60% of high school students who currently vape use the popular Juul brand, according to researchers who analyzed 2019 federal data on almost 20,000 U.S. teens.

Middle-school kids weren't far behind their older peers when it came to vaping rates, the report found. The data showed that about one in every 10 in this age group are current vape users, with 18% of this group reporting frequent use. Again, Juul and flavored varieties of e-cigarettes are very popular among younger teens.

Health advocates who've long fought for declines in smoking among the young said the rise in vaping is troubling.

"Most of the products studied contain nicotine - often in concentrations that surpass the average nicotine content in a combustible tobacco product," noted Andrea Spatarella, who directs the Center for Tobacco Control at Northwell Health in Great Neck, N.Y. "Considering these factors, young e-cigarette users are at high risk of becoming addicted to nicotine," she said.

A second study outlined the allure of flavored e-cigarettes for kids.

The study found that mint is the most popular e-cigarette flavor used by American teens, and fruity and "dessert" flavors are much more popular in this age group than tobacco flavoring.

The findings come just a few weeks after Juul - which makes the best-selling e-cigarette brand in the United States - said it would bow to pressure and take fruit and desert flavors off the market, but keep selling mint, menthol and tobacco flavors.

In September, the FDA announced that it would ban all non-tobacco e-cigarette flavors, but the Trump administration is reported to be backing away from a ban on mint and menthol flavors.

However, with mint the clear flavor of choice for teens, lead author Adam Leventhal said his team's study "calls into question whether regulations or sales suspensions of flavored e-cigarettes that exclude mint flavors would meaningfully reduce youth vaping." Leventhal directs the Institute for Addiction Science at the University of Southern California (USC).

Spatarella agreed. "The preferences [of teens] for flavors is shifting," she said, with users "'graduating' from candy or fruit flavors to more 'grown-up' flavors, such as menthol and mint."

In her view, "regulation and oversight of these products in not enough. Eliminating access to flavored e-cigarettes is a pro-active approach to a growing problem."

The USC study was based on data from a 2019 survey of more than 14,000 students in grades 8, 10 and 12, across the United States, who were asked which Juul flavor they use most often.

Among 8th graders, mango was most popular at 34% followed by mint at 29%, the findings showed.
In all grades, fruit flavoring was ranked third, followed by "other." In heavy-vaping teens who used Juul on 20 or more days in the past month, mint was the most popular flavor in all grades.

Both of the new studies were published online Nov. 5 in the Journal of the American Medical Association.

A study by Leventhal published Oct. 28 in the journal Pediatrics found that teens who use flavored e-cigarettes are more likely to become regular users and vape more heavily.

"Regulations which reduce youth exposure to flavored e-cigarettes may aid in preventing young people who try e-cigarettes from becoming long-term e-cig users," Leventhal said in a USC news release. "[Such moves] could also encourage the millions of U.S. adolescents who already use e-cigarettes to quit vaping, especially if they can no longer access e-cigs in flavors they like."

Dr. Len Horovitz is a lung specialist at Lenox Hill Hospital in New York City. He agreed with Leventhal, saying that "vaping needs to be outlawed, and will produce illness and death unless it is stopped."

Smoking
By Health & Medical Reviews and News at 05:49