Your Neighborhood's Walkability May Be A Trick-Or-Treat For Your Heart All Year: AHA News - Health, Medical and Fitness News Blog

Home Health News Health Reviews Heart Your Neighborhood's Walkability May Be A Trick-Or-Treat For Your Heart All Year: AHA News

Your Neighborhood's Walkability May Be A Trick-Or-Treat For Your Heart All Year: AHA News 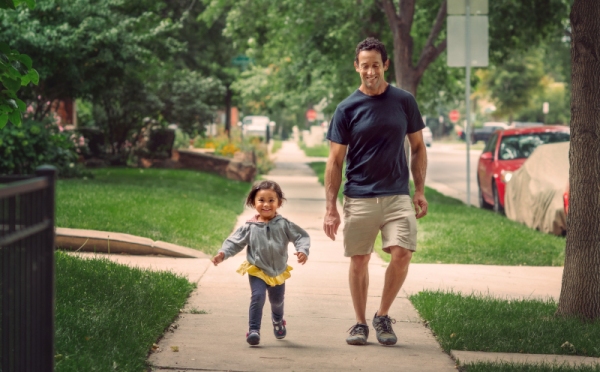 If you're trick-or-treating through a walkable neighborhood on Halloween, go back and do it again the next day, and the day after that - minus the stops for candy. It's a good heart-healthy habit year-round.

A new study published Thursday in the Journal of the American Heart Association reinforces the concept that living in a walkable neighborhood is a factor in cardiovascular health.

"It's one more piece of evidence that there could be real health benefits to making neighborhoods more walkable," said the study's lead author, Dr. Nicholas Howell of the University of Toronto and the Li Ka Shing Knowledge Institute at St. Michael's Hospital.

Howell said previous studies about the benefits of walkable neighborhoods have focused on "one part of the cardiovascular risk puzzle, like diabetes or high blood pressure. But risk of heart disease and stroke is a function of many risk factors together," he said. "What we wanted to do is take all of those together and combine them."

So, the researchers divided their neighborhoods into five degrees of walkability. The criteria included population density, housing density, number of shops and services nearby and street patterns.

The last category is important, Howell said, because "when you have a grid network of streets, it's fairly easy to get from point A to point B. But when there's cul-de-sacs and curved streets, even things that are close on a map can end up being far away."

The risk probability was assessed according to a formula that measures risk factors such as age, gender, cholesterol levels, diabetes and blood pressure to predict the chances developing cardiovascular disease within 10 years.

"That's not trivial," Howell said. "This study gives us more evidence that walkability could be linked to a higher risk of heart disease and stroke."

Dr. Scott Brown, research associate professor of public health sciences at the University of Miami Miller School of Medicine, said applying walkability to the cardiovascular risk equation "is quite innovative and important. This is the first study of which I'm aware that has actually done this."

Ideally, Brown said, a longer-term study could track actual cardiovascular outcomes relating to neighborhoods with different levels of walkability rather than a "static snapshot of risk."
But one result did confound the researchers.

According to the study, people in more walkable neighborhoods were more likely to smoke cigarettes, a major risk factor for cardiovascular disease.

"We're not sure what that means, and we want to do more follow-up studies because it was so unanticipated," Howell said. "A place that's walkable has a lot of shops and services, and maybe some of those shops sell cigarettes."

Other factors such as household income and socioeconomic status also might be at play, he said.
But the overall lesson is clear for public health, both researchers said.

"When we traditionally have looked at the health of patients we've said. 'You need to exercise more and eat better,' and we've sort of overlooked the role of the community in which the individual lives," said Brown, who reviewed the new study but wasn't part of the research. "This is really saying to policymakers and urban planners that potentially having more walkable neighborhoods may be a strategy for promoting better public health."

Even for people in less walkable areas, Howell said, "We have to give them links to more walkable neighborhoods, whether by public transit or other ways. And to be walkable it has to be safe, not just a well-designed neighborhood where nobody leaves their house."

Howell hopes the emphasis on preventing heart disease will be persuasive.

"People care about being overweight," he said. "But people really care about preventing a heart attack or stroke."

Heart
By Health & Medical Reviews and News at 05:10