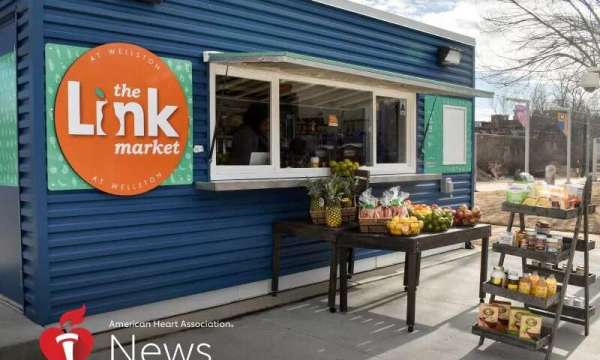 Every other Thursday, Kathryn McNary watches out the window of her apartment in St. Louis for the mail truck to arrive.

As soon as she spots it, she goes to the lobby with her shopping bag to pick up her produce from The Link Market, an innovative program begun in 2017 to supply St. Louis residents with healthy, affordable food. The nonprofit uses a retrofitted former mail truck for the delivery.

McNary, who lives in senior housing, always phones in her order ahead of time, often requesting green peppers, onions, sweet potatoes and orange juice. When possible, the food is sourced by local farms, including her favorite Polish sausage.

"I'm so thankful for them," the 67-year-old said. "I do drive, but a lot of people here don't, and some can't walk well either, so this is a blessing."

Jeremy Goss started Link Market when he was a medical student at St. Louis University School of Medicine.

Raised in Houston, he was introduced to St. Louis during his medical school interview. With a goal of helping children as a pediatric plastic surgeon, Goss told the dean interviewing him that he wanted to move to South America "to take care of the world's most vulnerable people."

"He told me, 'You don't have to go all the way there to make a difference; you can do it here in St. Louis,'" recalled Goss. He was convinced after learning about the hardships many residents face after decades of segregation, racism and poverty. More than 1 in 5 residents live in poverty in the city of about 303,000 people, according to the U.S. Census Bureau.

"After I moved to St. Louis, I didn't know what to do to give back at first," he said. "Then I started seeing patients having worse and worse health outcomes: diabetes, strokes, heart attacks. So many of those are informed by nutrition."

But he understood simply telling patients to eat better or exercise more wasn't enough.
"So many folks can't even afford healthy food or don't have access to it," he said. "Meanwhile, we have so many medicines to manage health problems. Food is medicine. We need to treat food with same level of importance as prescription medication."

Goss estimates Link serves about 30,000 families a year. He partners with farmers and community gardens to get fresh produce in large quantities at low prices. SNAP federal food assistance payments are accepted, and customers receive a discount for locally grown fruits and vegetables.

"We're doing our best to offer a grocery store experience," he said. "We sell packaged foods, meat and dairy, but we're emphasizing fruits and vegetables. Some of the food is grown at Fresh Starts Community Garden in one of the neighborhoods we service, which means everyone in the community is benefitting."

Goss is now a surgical resident in plastic and reconstructive surgery at Yale New Haven Hospital but continues to lead Link Market, which recently received a $20,000 grant from the American Heart Association's EmPowered to Serve Business Accelerator Program.

He is particularly excited about Link's newest effort - a 1,000-square-foot brick-and-mortar grocery store inside a new housing project. The Link Market at Renaissance Place, being developed in partnership with the St. Louis Housing Authority, is scheduled to open in February.

"What folks in food deserts truly deserve is a brick-and-mortar store," he said. "We hope to put them in more neighborhoods, and we hope they'll be a great model for other cities."

For McNary, who recalls when St. Louis was filled with thriving neighborhood shops, Link Market is more than a convenient way to shop for healthy food.

"It's a more personal way to shop," she said. "You really feel like you're part of the community."