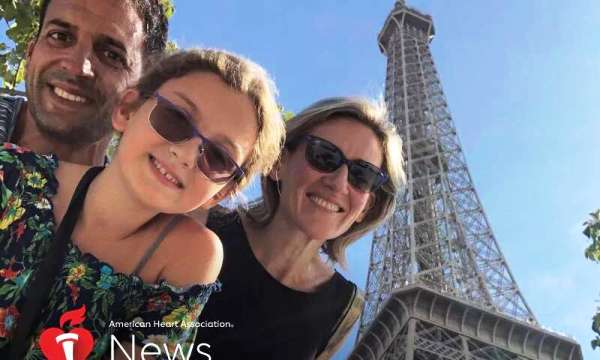 Like many 10-year-olds, Lara Asch loved burgers and fries, pasta and pizza.

Although she was staying active with gym classes at school, plus tennis and dance, her body began to show signs she may not be healthy.

"My stomach was getting bigger and I just wasn't comfortable with that," she said.

"Her legs and arms seemed normal, so we couldn't figure out why," said Dr. Federico Asch, Lara's dad. "Like any other kid, she'd eat some sweets, but she really wasn't a bad eater."

"Her LDL, or bad, cholesterol was high," Federico said. "But the biggest thing was that her triglycerides were enormously high."

The numbers were in such "total disarray," he said, that doctors repeated the tests a few weeks later. They got a similar result.

An estimated 7% of U.S. children and adolescents ages 6 to 19 have high total cholesterol, but only about half have ideal levels for HDL, non-HDL and total cholesterol, according to a recent analysis in the American Medical Association journal JAMA. The study found about 25% of teens and 15% of children ages 6 to 11 had unhealthy levels of at least one type of blood fat, including cholesterol and triglycerides.

The family, which lives in Washington, D.C., ultimately consulted with a lipid specialist at Children's Hospital of Philadelphia for guidance on dietary interventions that could help Lara avoid medication.

Working with the doctor, they designed a diet that dramatically reduced sugars and fats, and integrated some dietary supplements, including fish oil.

The first few months were rough, as everyone adjusted to Lara's new diet.

Most of her favorite foods were now off-limits. At lunchtime at school and dinners at home, Lara now filled her plate with salad, vegetables and lean proteins.

Birthday parties, where pizza and cake are mainstays, were also tough.

"At school or camp, when people were trading food, it was really hard to say, 'No, I can't,'" Lara said.
She started reading food labels to better understand what she could have.

"She even corrects us sometimes when we try to give her something that isn't in her diet," said Federico, who serves on the local board of the American Heart Association.

Lara increased her physical activity. She began doing ballet, hip-hop or tennis each day in addition to gym classes at school.

Testing every four months showed the diet changes were making an impact, both on her cholesterol and her weight.

Doctors aren't sure why Lara's triglycerides were so high. While Federico was diagnosed with high cholesterol at age 27, testing indicated Lara's condition was not genetically linked.

Federico said his daughter's diagnosis forced him to think differently about the food kids eat.

"I always figured she had a balanced diet, but for her, it wasn't healthy," he said. "We all have to have greater awareness about what we are eating."

Now when Lara goes to parties, her parents send a snack she can enjoy. Lara is well versed in her restrictions and talks openly about them with her classmates, just as someone with food allergies might.

"A lot of people think, 'It can't happen to me.' But it can happen to anyone, even in kids who seem healthy," she said.

Lara, who is now 11, still loves pizza, but now it's made with cauliflower crust. While visiting her family in Croatia over the summer, she noticed family members were serving healthier menus, with fewer salty or sweet snacks. She began working on a recipe book with her grandma, filled with healthy recipes for everyday meals. Her favorite: A cherry cake made using egg whites, oatmeal, whole wheat flour and sour cherries.

"We've all been working as a team to eat healthier," she said.

Lara recently began sixth grade. She plans to continue dancing and playing tennis. She encourages friends and family to stay motivated to maintain a healthy diet to protect heart health.

"Making change can be hard, but always believe that you can do it," she said.

Health Reviews
By Health & Medical Reviews and News at 06:35